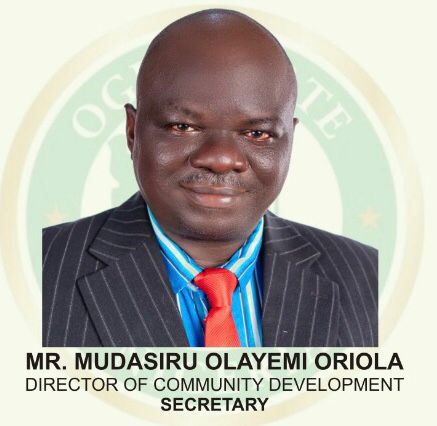 A condolence message from the media office of chairman, Peace Building Committee on Farmers/Herders Conflicts, Honourable Kayode Oladele, described Oriola’s death as deeply shocking and saddening, noting that the deceased was known for his dedication to duty, doggedness, humility and high sense of humour.

Borrowing from Albert Einstein wise words that “the value of a man should be seen in what he gives and not in what he is able to receive,” Oladele explained how Oriola who was last seen on Friday, October 1, at the MKO Abiola’s stadium during the 61st independence anniversary celebrations worked with passion, integrity and energy as director of Community Development in the state’s Ministry of Cooperative and Community Development.

Oladele who commiserated with the deceased’s family, Governor Dapo Abiodun and the good people of Ogun State, described late Oriola as a great team player saying “he was a man that inspired peace, exemplified patriotism and personified unity.”

“He was a living proof of how to support, harness, revitalise and create action plans for community development. By his death all the people who knew him will miss a highly intelligent, vibrant and amiable individual with a rare charm of personality,” the message concluded.

We Have Not Had Water Supply In Months ― Abeokuta Residents

In spite of the huge investment in the water sector by the government and international organisations, water scarcity has grown to become a perennial nightmare for residents of Abeokuta, the Ogun State capital. This report x-rays the lives and experiences of residents in getting clean, potable and affordable water amidst the surge of COVID-19 cases in the state.